Ares, god of war and half-brother of the mighty Hercules, has decided to go against Zeus' wishes to defeat Hercules with a champion of his own!  It's Tarok, the king of the jungle, who he chooses to do battle with the demigod.

On a tropical beach just outside the wild man's domain, Hercules falls from the sky onto Tarok.  The jungle champion misinterprets his sudden arrival as an attack and a threat to his kinghood! 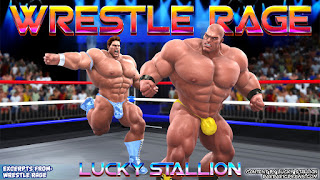 Buy a copy at Gumroad                  ●                 Buy a copy at Lulu
One month after the incredible upset and defeat of Alexi Volkov by Gorilla George Brogan for the title and belt of World Heavyweight Champion, Ryan Dermot, Alexi's partner, challenges the Australian to a match in the hopes of exacting revenge for his lover. Gorilla is only happy to oblige the American's challenge, and the match is on!

This story includes an alternate ending, many new panels, and an all new text story.

Big Red in the Hood 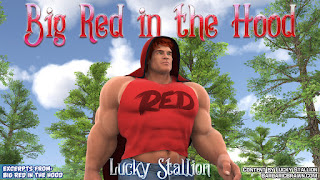 Buy a copy at Gumroad                  ●                 Buy a copy at Lulu
One Saturday morning, Big Red is tasked by his father to deliver a bag across the forest.  Begrudgingly, Red agrees and sets out. But as he continues on the path to his delivery, he's being watched and followed by one with a steely pair of eyes and sharp fangs!

This story includes an alternate ending and new and remastered panels.