Having won his battle against fellow native, O'rah, Tarok became the Jungle King and ruled over the harsh wild as its leader.  One day, some years later, Kuren, Tarok's son, happened upon a devastating sight: a clearcutting of the lush jungle and destruction of its plantlife!  Even stranger yet was who was leading the campaign... O'rah!  Kuren raced back into the dark jungle to warn Tarok.

It's in the middle of a holy site that Tarok confronts the other man responsible for the clearcutting... with O'rah lurking close by.  Muscle is pitted against muscle as the two opposing forces clash, with great stakes and the future of the jungle hanging in the balance!

This story includes an alternate ending and a bonus assortment of seven panels. 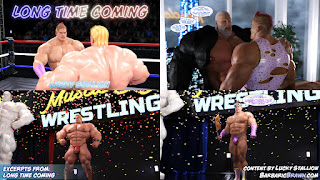 Buy a copy at Gumroad                   ●                 Buy a copy at Lulu Hunter Wyatt Strong, son of Samson Strong, owner of Muscle City Wrestling and Muscle City Boxing wants to wrestle!  The young man of 24 and middleweight wants his debut match to be against Russian heavyweight, Alexi Volkov! Samson agrees to the match and sets up Hunter to wrestle on the next Friday Night Wrestling show with sex stakes.  He also issues a direct order to Alexi: wrestle Hunter and let him win.  With no option buy comply, the Soviet slammer agrees to the boss' demands and prepares himself to wrestle that Friday night. Wielding a gold paddle worth a fortune, hollowed out with a dollar sign, Hunter struts down the aisle as Prince Pain, ready to deliver punishment to anyone foolish enough to step into his ring!  Alexi faces a difficult prospect as he presses pecs with his boss' son, knowing that his victory would bring his firing and his defeat would give the younge
Read more 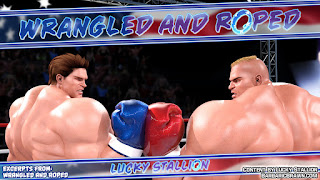 Buy a copy at Gumroad                   ●                 Buy a copy at Lulu Ryan Dermot and Brock Walker face off in their first match together -- not as wrestlers, but donning the boxing gloves!  Brock, the millionaire Texan, has recently joined the Muscle City Wrestling Federation and soon takes on Ryan in the boxing ring! This story includes an alternate ending, new prologue, new epilogue, and new and remastered panels. 144 page PDF   ||   Originally created: April 5, 2021
Read more 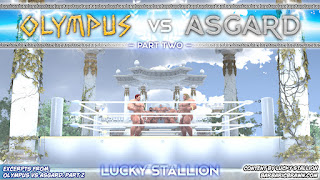 Buy a copy at Gumroad                   ●                 Buy a copy at Lulu High up over the lands dwelt upon by mortal men, Zeus, Odin, Hercules, and Thor had waged high-stakes wrestling in the ring centered in the Grand Arena on Mount Olympus.  With control over Mount Olympus, Odin drained and transferred the powers and might of the Olympian gods and goddesses to the Asgardians. But one Olympian did not heed the call of the Allfather and new king of Olympus. Infuriated by the defeat of Hercules and Zeus, Ares, the god of war, vowed to find a way to return power back to Olympus and punish the Asgardians for their insolence! This story includes an alternate ending, new text segments, and new and remastered panels. Also check out the Part 1 and Part 2 Bundle at Gumroad!   Thanks for your support! 153 page PDF   ||   Originally created: May 31, 2021
Read more